Pictures of the NC Delegation

Sorry for the delay. Here are some pix of the NC folks attending Convention. Click the group picture for a larger version. 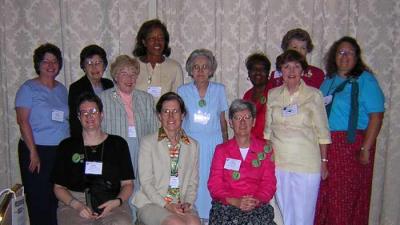 For a picture of Lill of Wilmington, see below.

Mary of the New Bern branch was also at Convention, but needed to leave before we started taking the group pictures. She and other “past poops” from MD were also helping as volunteers. In this picture from the Saturday photo gallery, Mary is on the right behind the Credentials booth.

Jane of the Wilmington branch was also in DC, but she, too, was working as a convention volunteer and didn’t have much time to spend with the NC delegation. Thanks to Mary, Jane, to Janet, Warren and Amanda from Raleigh and to all the other volunteers for keeping things running so smoothly.