Candidates for treasurer and vice president

A new structure for the AAUW NC board was approved at the 2013 annual meeting. We now have four elected officers, each serving two-year terms. Mary Peterson, president, Sandra McLaurin, branch advocate, have been serving this year with Denny McGuire, treasurer, and Karla Atkinson, vice president. Denny and Karla are rolling off the board on June 30, though Karla will continue in the role of newsletter editor. Mary and Denny will be joined by a new treasurer and vice president.

The Nominating Committee, recruited from the Council of Branch Presidents and composed of Michelle Evans, JoAnn Hall, Barbara Ann Hughes, Kathleen Hespelt, and Sandra McLaurin presents the following two candidates for  two-year terms as Treasurer and Vice-President of AAUW NC.

JoAnn Taylor Hall, president of the Jacksonville Regional Branch, is the nominee for the position of treasurer. She received a Masters of Library Science from Drexel University and an undergraduate degree in Speech and Communication from the University of Delaware. Currently, she is the Medical Librarian at the Naval Hospital, Camp Lejeune, NC. She served 13 years in the United States Marine Corps and worked four years as a high school Media Center Coordinator.

She has been a member of AAUW for 10 years. She is a very active member and has served as the branch secretary, treasurer and branch president for multiple years.

She is a certified Personal Fitness Trainer and a member of the Aerobics and Fitness Association of America. She is a member of the Chain of Purls, a local knit and crochet group. She has a successful Avon business.
JoAnn has been married for 34 years and has four sons and seven grandchildren. 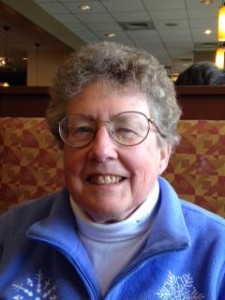 She has taught Physical Education in K – 12. She has taught Teacher Preparation in Physical Education at the college level.
She has been an AAUW Member for 28 years in Presque Isle Maine, Kalamazoo, Michigan, Asheville, and Hendersonville. In the Hendersonville Branch, she has served as 1st Vice President in charge of programs, President, Nominating Committee Chair, and LAF Chair. For AAUW NC, she has served as a member of the By-Laws Committee, the Restructure Committee, and Nominating Committee.

Peg works as an Audio Host at Biltmore House. She is a member of the Board of Directors at The Healing Place in Hendersonville and is involved in many community activities in the area.

Just for fun she plays tennis and skis (Certified Level 1 Instructor). She likes to sew, quilt, do counted cross stitch, and knit and work in her garden.

1 thought on “Candidates for treasurer and vice president”